So what's the deal with Patagonian Argentine BBQ and how's it so distinct from other variations of Wood Fired Grills? If you are looking for some clarification you have found the right site. There are many variations of what people classify as Wood Burning Barbecue world wide. In California there is a  claim to fame form of BBQ that is identified as Santa Maria BBQ. Santa Maria Barbecue traditionally burns coastal red oak and cooks Tri-Tip over an enclosed firebox. The Red Oak Smoke adds a distinct smokey flavor to the meat and thus ranking Santa Maria on the map for BBQ. Another famous style of cooking, is the all American style of Texas Smoked Barbecue. Texans love their beloved Smoked Brisket and typically smoke their meats for hours to ensure that they get that smoke ring they  crave for. So how does BBQ differ in Latin American countries like Argentina and Uruguay if they all use fire to roast meat? The answer to that question is the process undergone differs from the way it's done in Santa Maria and Texas BBQ. In Uruguay one of the biggest distinctions of grilling with wood is the Brasero. The Brasero works similarly to a charcoal chimney that get coals lit only instead of coals being lit wood is the new player to the game. The Sole purpose of a Brasero is to create embers as seen below.

The Fire gets lit in the Brasero using a mixture of cooking oil & Newspaper. Be careful not to overfill the ember maker and be sure to leave some air pockets for your fire to breath. Once lit let burn for 30-45 minutes until embers begin falling out onto the split fire bricks. 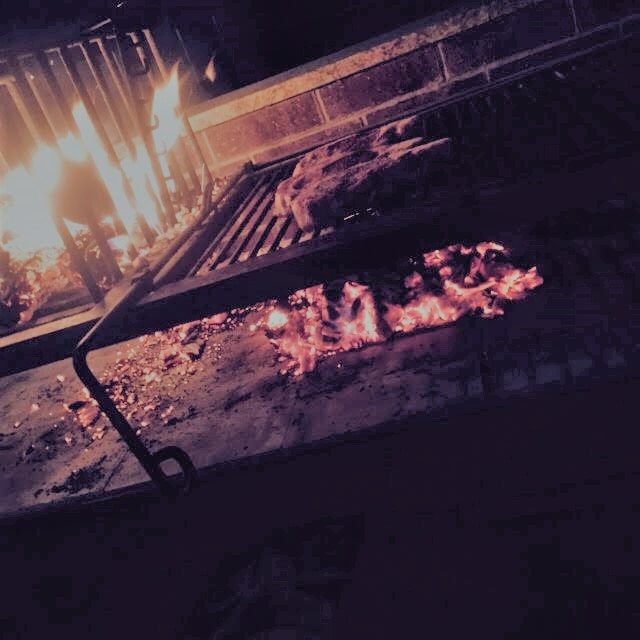 As soon as there is a decent amount of embers made, slide the embers using your ember tool under the grill grate and your grill is prepped and ready to go. Once the embers are prepped they should heat your meat at a consistent temperature and are more forgiving to cook on then over direct flame.  Now that you know how to use an Ember maker I can explain why it is used and what are the benefits of using a Brasero. In Argentina, Argentinians love their meat so much that the very thought of smoke touching their meat is taboo. The use of a Brasero greatly diminishes the amount of overpowering smoke that touches the meat thus releasing the purest meat taste possible with only subtle notes of smoke flavor. The result of this cooking style is enjoyed so much that these what they call Asador's are commonly found in households throughout the region.